Although I don’t really follow football, it was impossible to escape the pre-game media coverage of the February 2 “Superb Owl,” as Stephen Colbert called it.  Still in the mode of thinking about competition narratives, I tuned into the chatter as various commentators previewed the big game.

By all accounts, this match-up was to be an epic struggle. Praise was heaped on both teams for their performance in the regular season. The big game was billed as a contest between the team with the best offense in the nation (Denver) vs. the team with the best defense in the nation (Seattle). With opponents so well matched, many commentators were at a loss when called upon to predict who would win…let alone what the point spread would be. Even the master statistician and prognosticator Nate Silver (author of The Signal and the Noise, and creator of the FiveThirtyEight blog) wouldn’t venture a prediction.

As game day approached, it seemed to me that when pushed, commentators leaned a little bit toward Denver, citing quarterback Peyton Manning’s greater experience as a tip factor for the win. Frank Bruni’s column “Maturity’s Victories” nicely sums up that line of thought. Moreover, Manning has a compelling comeback story, and I think this made some commentators feel that Denver deserved to win.

Be that as it may, the message from the majority of commentators was this: both teams were extremely strong, and this would be A VERY CLOSE GAME.

This upset led to really entertaining post-game commentary, in which pretty much every sportscaster was forced to account for the unthinkable, the completely unforeseen, the utter “who’d a thunk it” nature of the outcome.

When listening to the post-game rationales, it occurred to me that those covering the event were in a position similar to one that college counselors sometimes find themselves in when admissions decisions are delivered. Sportscasters were talking about the very talented Peyton Manning in the way that college counselors talk about that outstanding kid in the senior class who looked likely to be admitted to several highly selective colleges…but somehow came up short. The kid had everything going for him – every possible qualification that a college could ask for – and yet, inexplicably, was turned down by the schools you’d think would open their doors for such an accomplished fellow.

I had great sympathy for those sportscasters who struggled to explain why Manning and the Broncos were unable to make headway against Seattle. True, Seattle played a great game, but nothing in the Broncos recent performance predicted that they would be so overwhelmed by the Seahawks that day. But with airtime to fill and audiences wanting to know what the heck happened, the pundits scrambled to make sense of the outcome.

On the other hand, I did not have sympathy for the sportscasters who quickly jumped on the “this ruins everything” bandwagon. Those who floated the idea that this particular loss tarnished the Broncos entire season and ruined Manning’s legacy as a player seemed laughably short-sighted to me. Yes, this was one major (and unfortunately really high profile) loss, but this blow-out didn’t diminish the previous achievements of Manning or the Broncos.

For me, the pre-game and post-game coverage drove home three thorny truths of college counseling, sportscasting, and other professions in which the forecasting of future events plays a part:

2. We hate being uncomfortable, and we want quick explanations of unexpected events – regardless of the fact that the reliability of the explanation frequently varies inversely with the speed with which it is offered.

3. When the unexpected outcome occurs, it can trigger what I call a “cognitive eclipse.” This is a situation in which the light of common sense is temporarily obscured by the shock of the outcome. Depending on the event and the magnitude of the shock, it will take a greater or lesser amount of time for participants, commentators and the audience to see the light again and recover a sense of perspective.

For Peyton Manning, who has had lots of experience winning and losing in the public eye, perspective should be restored pretty quickly.  For that outstanding high school senior, less accustomed to dealing with disappointment in a public forum, it will take longer to regain equilibrium.

Since we’re just about to head into decision season for this year’s admissions cycle, it’s worth noting that the single Super Bowl result doesn’t tarnish Manning’s legacy as a quarterback or mean he’s washed up as an athlete. Similarly, being turned down by a college (or colleges) doesn’t eradicate the previous achievements of that outstanding senior or render him a failure.  Sooner or later, the cognitive eclipse and frantic post-outcome commentary that accompany an unexpected outcome will pass.   Inevitably, today’s headline becomes tomorrow’s footnote.

So although it’s understandable to feel like this when the unexpected (and disappointing) outcome occurs: 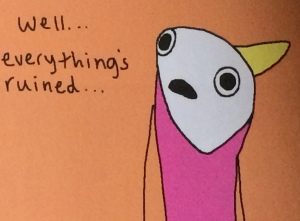 Picture from “Motivation” in Allie Brosh’s  book:
Hyperbole and a Half

The best plan is to: 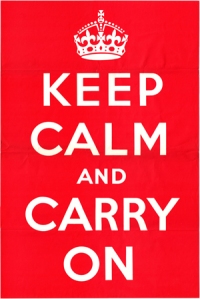